The birth of an evergrowing Elephant

One might question our sanity, and not see any connection between a sociological laboratory and elephants, and rightfully so. It is due to the language barrier that this wordplay remains unclear to our English-speaking readers. If you take the first letters of the name of our laboratory in Russian, which is Laboratoria (Laboratory) Sotsiologii (of Sociology) Obrazovania (in Education) I Nauki (and Science), you will get letters L, S, O, and N. Together, they make SLON, which in Russian means “elephant”. This is precisely why we have been using this nickname for ourselves, and why you see the little elephant figure in the top left corner of our website. Besides, elephants are great animals, known for their social complexity and strong family bonds, so why not them?
Svetlana Savelyeva, the deputy head of the Laboratory of Sociology in Education and Science, has been there from the very beginning, and witnessed its development throughout the years. Read her story to learn more about the history of SLON and its first expeditions, and find out how we started our research on schools.

According to Svetlana Savelyeva, the history of the Laboratory began in 2007, when it was officially registered. However, it all started even earlier, in 2006, when several graduates of the European University at St. Petersburg had become part of the team of a new large–scale project on poverty and inequality. The study intended to understand poverty. To cover different aspects of this complex issue, it included both rural and urban cases, and involved research teams working in different parts of Russia, such as Irkutsk, Ulyanovsk, and Novosibirsk.

Svetlana Savelyeva, who was at the time working together with Maria Safonova, was planning to focus on the rural case in Priozersky district, when the head of the research project, Daniel Alexandrov, suggested getting the students involved too. At first, project participants resisted the idea. Bringing the students into the team seemed like a burden: there was not enough time to plan for their participation in the project, and it was not exactly clear how to work with them. In the end, five lucky students were allowed to embark on this adventure.

“We rented a flat there and organized a research squad of some sort. We had to learn many new things. I already had experience in conducting interviews, but we found ourselves in a completely new environment. First, we had to create our research design independently. We did not know anyone there, and we needed to search for contacts, interview random people on the streets… A real school of hard knocks! The expeditions we do now are definitely a lighter version of what we had to go through back then, because the topics are less intense, and you do not have to face the harsh reality as much. We were looking for poverty, and we discovered many other social disadvantages along the way. After spending a month there, we realized that this experience was not only valuable for students; having them with us helped us to find a new perspective too. It was a win-win situation.”

According to Svetlana, the students loved it so much that they refused to quit. After the expedition was over, they gathered at HSE semi-legally to discuss sociology books. Once, the students even had to clean the floor in the seminar room themselves. It was winter, and the floor became very messy, all covered in muddy footprints. The students could not risk being kicked out of their meeting place, and left the room spotlessly clean. They displayed some real determination, and it was about to pay off.

The official birth of SLON

Back then, there were no research laboratories at HSE University - St. Petersburg. SLON became one of its first organizations that promoted student involvement in research projects.

The students kept gathering and discussing English-language sociological texts for the whole of next year. In summer 2007, a group of sociologists and students from HSE University – St. Petersburg and the European University went on a new expedition. It became more and more clear that it was crucial for the students to go on these trips to get fully immersed into the fieldwork.

“Going “into the wild” is a very positive and rewarding experience for any student, regardless of their major.  It does not have to be far geographically speaking; the important bit is to put them in a new social environment that is entirely different from theirs. Seeing the different sides to this life does really expand your horizons, and you realize that there is always more going on; there is always more than just once way of doing things.  We all become set in our ways. Experiences like this really open you up to different perspectives.”

In autumn 2007, the rector of our university, Yaroslav Kuzminov, together with the vice-rector, Marina Yudkevich, paid a visit to St. Petersburg. The rector had already heard about the young researchers and their work, and it was suggested to organize an informal meeting between them and the university officials, hosted by Daniel Alexandrov, at his own home.

“I remember sitting at that big table in Daniel Alexandrov’s flat, with a lampshade above our heads. Mr. Kuzminov was drinking tea and asking everybody about our work, our lives, etc. The starry-eyed students were nervously telling him about their interviews and fieldwork, being both childishly excited and mature. In the end, Mr. Kuzminov gave a short speech, in which he stated that the university needed to organize a research laboratory in St. Petersburg. We were stunned to find out that there were some serious plans made for the development of student research at the university.”

The meeting had been very inspiring, and in November 2007, HSE University - St. Petersburg launched the Laboratory of Sociology in Education and Science, which became its first research laboratory.

Svetlana Savelyeva joined the project in 2006, while she was still studying at the European University. She was in charge of working with students during the expeditions. In 2007, Daniel Alexandrov offered her to become deputy head of the Laboratory, and she has been working at HSE ever since.

Expeditions have remained a crucial part of the Laboratory’s work. For the last two years (2018-2019), its students and staff have been traveling to the Kaluga region, studying school climate, and talking to students and teachers from different educational institutions. Now the expeditions only last two weeks instead of a month, or even a whole summer, and are officially supported by the Minister of Education of the Kaluga Region. The expeditions have been elevated to a completely new level and became even more impactful. Now researchers have an established network of contacts, and detailed interview guides, that they know by heart. Moreover, they present detailed reports to the principals of the schools that are involved in the study. Learn more about this year’s expedition here.

Our projects: then and now

When asked what the main topics studied by the Laboratory are, Svetlana Savelyeva replies that the scope of interests has always been very wide. The Laboratory started from the expeditions dedicated to studying poverty, but nowadays it is focusing on education and inequality. There have been some research projects on the sociology of science, but they were gradually put on the back burner.

“At some point we were studying communities and inclusion. We examined rural and urban communities, their operating principles and leading forces.”

Nowadays Svetlana is writing her dissertation on the differentiation of schools. This topic has been thoroughly studied by the researchers of the Laboratory of Sociology in Education and Science. The researchers have conducted a great amount of fieldwork, studying children. They were also examining how schools reduce or reproduce social inequality.

The Laboratory has created its own unique methodology for analyzing the school climate.

Svetlana says: “We created this methodology ourselves. Schools cannot be assessed based on Unified State Exam scores and pupils’ marks only; you need to consider the school climate, the overall atmosphere, trust levels between students and teachers. Thus, we came up with a methodology that would include more social-psychological indices of school climate. We also study risk behaviors among adolescents.”

One of the topics that the Laboratory has been focusing on recently is children of migrants, their cultural adaptation, and the main problems they are facing. Knowledge of the Russian language is especially important here, since the ability to express yourself in Russian predetermines a lot in the learning process. The laboratory also examines how these children communicate with their peers and classmates, and form friendships and social networks. Children of migrants are at risk when it comes to social inclusion, which makes this research especially important.

“We have been studying this for a long time, and we wanted to finally put together all of our old materials. The reality is constantly changing, and some of our findings are not as relevant anymore. Our goal was to conduct more field research, and publish a book on this subject. It is relevant, but there is still little information on this topic.”

Svetlana is currently leading the project on school choice. The project studies how parents choose schools, how parents’ perceptions of schools differ, what different parental beliefs in relation to schools result in, and how this process is related to the further social reproduction of inequality.

Another important research direction, that we will be coveting later, is digital traces and big data. The laboratory has now been studying this topic for five years, under the leadership of Ilya Musabirov.

Exploring the world of humans

When being asked what the best part of working at the Laboratory is, Svetlana Savelyeva answers: “I love working with people. I do enjoy poking around the data and analyzing it, but the human part is also very important. I love having an opportunity to explore the world of humans while doing my research and seeing their perspectives on how life works. It is especially interesting to do this together with the students. They have all these convictions, and then boom, they face the reality, and they are shocked. I enjoy witnessing this process and helping them broaden their horizons.”

“It can be hard to accept sometimes, because you expect certain things to happen, but everything works out completely differently. On the other hand, change is incredibly important for both one’s personal growth and the development of the Laboratory as an organization. I think it is great that we have such a wide scope of interests, and that we have not been limiting ourselves to just one narrow topic. It is really important to think big, and that is what we are trying to do.”

Svetlana is sure that the main mission of the Laboratory is involving students in research. This will always remain its main function, regardless of possible changes in research interests, or other future developments. It is important to support the transfer of knowledge between experienced researchers and beginners, which is done through expeditions, seminars and discussions. The Laboratory has a lot to offer to the students, and its wide range of interests allows everyone to find their own unique path in research. 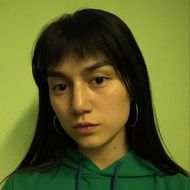 Adelina Akhmedova
About
Laboratory of Sociology in Education and Science