From the 28th of August to the 4th of September, there was held the Summer School and Conference ISMW FRUCT on artificial intelligence, social networks and Web technologies. The staff of our laboratory and the students of the academic program on Sociology attended this Summer School.

Alina Bakhitova, one of the School participants, also was helping to organize the event. A year earlier, in 2015, Alina was a volunteer at the same conference, but this year she became one of the key organizers. Several our students of the 3rd and 4th year attended the Summer School: Stanislav Pozdnyakov, Denis Bulygin, Alyona Moskovaya, Anastasia Menshikova, Anna Golovchenko, Irina Krylova, and Anastasia Kuznetsova. There were HSE students among the conference volunteers: Vasilina Charushina, Anastasia Masalova, Alina Kamanina, Anastasia Pushnova, and Mary Chachibaya.

Alina tells about her first experience in organizing a conference:

"When you are just a volunteer, often it seems that this is so very easy: inviting speakers, finding sponsors, organizing coffee breaks. But in reality, there’s a huge organizational work behind the facade, which starts long before the actual event. For example, I joined the organizing committee six months ago. I was mostly engaged in routine work: keeping up and monitoring accounts at social networks, preparing materials for the web site, answering questions from the participants, typed and printed out materials for the conference. This all doesn’t sound very interesting, but these long hours of work and sleepless nights pay off in full when a school or conference starts, and you get enthusiastic feedback from the participants, and realize that you didn’t work in vain." 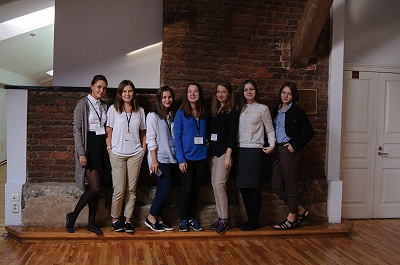 There were several parallel sections at the Summer School. Everyone had a chance to choose what they liked most. At the beginning, there was a brief introduction in the programming language R, because many participants were using Python, Java, and programming languages. This particular programming environment was new for them. The introduction was given by Vitaliy Khudobakhshov from the social network Odnoklassniki. Alexander Semenov (International Laboratory for Applied Network Analysis, HSE) gave a talk about the role of sociologists in projects on data analysis. Vadim Strizhov (Computing Center RAS, MIPT) was talking about experiments in learning. Most of the talks were focused on text analysis and topic-based modeling. Evgeniy Putin (ITMO) also presented a talk on neural networks and deep learning.  Many speakers work abroad, and they were giving their presentations in English.

Irina Krylova on the Summer School and the Conference: 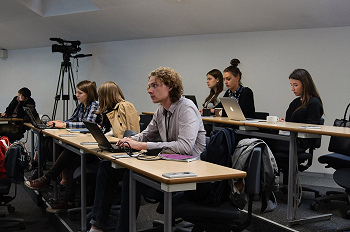 "Unfortunately, most of the courses implied that the listeners should be familiar with other programming languages. This made participation in discussions difficult for me and my colleagues. However, during the project work, we were able to use the familiar tools, and the practical work was successful.”

After the conference, all participants received certificates of completion, obtained unique knowledge from other researchers, and made acquaintance with many other students with similar research interests. Some of them even started considering taking a training course or doing joint research.