The Conference on Media Studies

On the 12th of February, the Inter-University Research and Applied Conference of Bachelors, Masters and PhD students took place in Moscow, under the title of “Media research: theory, practice and research perspectives”. Daria Kharkina, a trainee researcher of SESL and the student of the 3rd year program in Sociology at HSE, presented there her talk, "Polarization and Mediator Sites in the News Communities at the Social Network VK".

In her presentation, she focused on specific features of political views in the Russian online environment, based on the data collected in the most popular Russian social network, VKontakte (VK). Daria presented the results of her analysis of patterns in blog comments in popular news communities. Despite the strong dominance of pro-state views in the real world, their prevalence in the virtual world is comparable with the support of the opposition ideas, as can be shown on the number of news communities that adhere to one of these opposing views. It was found that the network users only rarely read the news in the blogs that promote a competing point of view, and rarely leave comments on these news. However, there are few platforms that express neutral views, and they can act as meeting grounds for both opposing groups, which helps to reduce the polarization of society in regards of political affiliation. 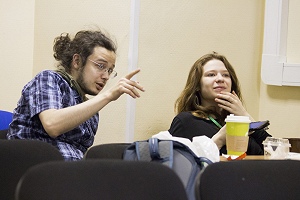 Daria has shared with us her impressions: “My presentation was the only one that didn’t use terms like “framing” or "discourse”, which are so frequent in any research on the media. On a more serious note, the approach of these researchers is very different from what I’ve got used to see in the studies of my colleagues, although projects in the areas of media and sociology often deal with similar problems.”

Even though the conference title didn’t mention usage of computational methods nor online data, many participants were referring to the digital world, one way or another, while discussing pressing issues of the modern society. It’s just wonderful that the HSE follows the modern trends and changes the academic programs in social and humanities sciences by adding digital and computational methods. For example, next year, the HSE in Moscow will be launching a Master program on data journalism. The organizers and lecturers of this program were taking part in the conference as section chairs and guest lecturers.

Daria told us: “After several days, which I spent among media researchers, I have identified for myself several popular approaches to the media studies. The first approach uses web analysis tools, such as Google Trends or programs developed for working with the data collected from the VKontakte network. These data are used in studies on a range of research problems. The second approach includes qualitative studies of the transition from the old media to the new ones. And all of the other approaches can be lumped together into what I would call the “traditional media research", in my opinion. The presentations of researchers who used the first two approaches were most helpful to me and to my own studies."

The presentation delivered by Daria was considered as one of the best in the whole section “Journalism and PR: practices and representations”, according to a rating survey of the section members, and according to the opinions of the section chairs, Prof. Sergey Korzun (who was the founder and the first Editor-in-Chief of the “Echo of Moscow” radio station) and the Associate Professor Marina Shilina. There were quite a few more experienced researchers at the conference, which made the choice of the chairs was especially flattering. The research paper based on this presentation has been published in the “Business. Company. Power” magazine, and for her successful presentation Daria received a complimentary green T-shirt as a memento.

By Irina Krylova and Daria Kharkina