On April 2-4 lectures and seminars by professor Mark Tranmer were held at the Laboratory. 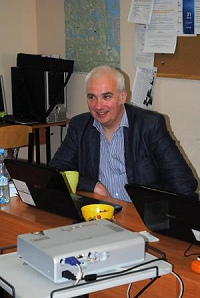 On April 2-4 lectures and seminars by professor Mark Tranmer were held at the Laboratory. Mark Tranmer is one of the world-famous experts in statistics from the University of Manchester and the researcher at Mitchell Centrefor Social Network Analysis. Clyde Mitchell was one of the founders of the network analysis. He studied networks in urban areas of Africa.

Classical statistics that is used by the most economists and sociologists applies models based on the assumption of independence of measurements. Data from surveys with a random sample supply scientists with such measurements. If one student from each of 700 schools of St. Petersburg is polled, there is a reason to believe that the results are independent. But the survey that is being conducted by SESL focuses on friendship or fellowship in the classes. Although the students respond to the questionnaire individually, the results are interdependent: for example, a friend of my friend is likely to be a friend of mine too. This effect is called transitivity in social network analysis. Applying standard statistical analysis on network data, we overestimate effects and underestimate errors.

Development of classical statistics dates back to the XIX century, but network analysis is only about twenty years old. Statistical modeling of network data is based on the approach of generating a set of networks with some given characteristics of the original network. After that the probability of random occurrence of any of the studied effects is calculated. Contemporary theory of network analysis is being created right now in several centers around the world: Groningen, Oxford, Manchester, Melbourne, Seattle, and Pittsburgh. Marijtje van Duijn and Christian Steglich, who visited the Laboratory the last year, are involved in the development of new statistical methods for analyzing networks. Mark Tranmer, a specialist in multi-level analysis, works on application of statistical methods to network data and on development of new software for network analysis. 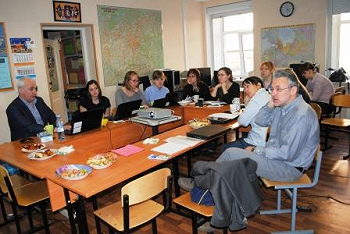 The first lecture of professor Tranmer was called "Statistical Models for Social Networks." He told about the history of network analysis development from the first log-linear models p1 and models with random effects p2 to more contemporary methods of ERGM (Exponential Random Graph Models) and SIENA. SIENA models are applied to longitudinal data and allow studying the evolution of network structure in parallel with the evolution of the behavior of the network. Mark Tranmer divided the effect of homophily (association by similarity) and the effect of "social contamination" (close friends adopt each other's attitudes, behavior, etc.) The work continued in the form of seminars - practical computing and application of the network analysis. Professor Tranmer had prepared a number of exercises in R. He explained in practice how to compensate the effects of network autocorrelation in regression models. After the seminar, participants got an opportunity to consult with Mark Tranmer on their current projects and get advice on the specification of models. 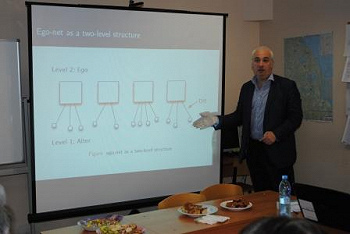 The second day began with a lecture on multilevel analysis. There were some people in the audience who use network analysis in their research, but others have heard of it for the first time. The lecture was still interesting for all, as it was brilliant and informative.

In conclusion, M.Tranmer told in detail about his recent project he works on with Verónica de Miguel Luken. They study networks of migrants in Spain using methods of multilevel network analysis. The researchers were interested in formation of links between migrants and local populations and the reasons that affect this. Mark Tranmer showed how to apply the methods of multi-level analysis on network data on the example of this study. After the official part professor Mark Tranmer talked about his scientific and non-scientific life. He even showed videos of his musical band in the Internet.