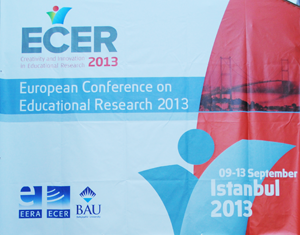 The conference ECER 2013 took place at Bahçeşehir University in Istanbul, Turkey from 10 to 13 September 2013. National governments and the European Union see innovation as increasingly important for the development of the 21st century knowledge society. Educational researchers know that educational actors have the power to unlock the creative, innovative and critical potential of the young. And our Lab presented three papers on ECER'13.

Our study is focused on investigation of relations between students’ academic achievement and popularity among peers in different academic contexts. We suggest that the relation between good grades and popularity can be used in school assessment. In “good schools” high-achieving students are popular, while in “troubled” school where most children are disengaged from learning, students with good grades are unpopular and thus sanctioned by the peers. In order to disentangle the relations between student’s academic achievement and popularity among peers we carried out the research using sociometric methods.
Popularity among peers is considered to be one of the indicators of their successful integration into the school life. Unpopular students, who are loosely connected with their peer network, often demonstrate poor mental health and lower psychological well-being, and have higher risk of school drop-out. Sociometric popularity measured as number of likes and dislikes of their classmates indicates the student’s place in the structure of class friendship network (Cillessen, Borch 2006, Rubin 2007, Rodkin et al 2000).
It is clear that factors affecting popularity are context-specific: a student who is popular in one group may be quite unpopular in another. In popularity studies context is usually understood as gender or race/ethnic composition of school or grade. The effect of unbalanced gender composition on perceived popularity is strongly noticeable in environments with different behavioral norms for girls and boys (Adler et al, 1992). Under conditions of race/ethnic homophily the minority group has either to adopt the norms of the majority or create its own, relatively isolated, “sub-culture” (Meisinger et al 2007).
Our study is focused on the effect of context on the relation between popularity and individual academic achievement. We aim to clarify how different academic contexts influence popularity of students.
We have three hypotheses to consider: (1) in groups with high academic motivation student’s academic success is positively related to popularity among peers; (2) in groups with low academic motivation student’s academic success is negatively related to popularity among peers; (3) relation between individual academic achievement and popularity is gender-specific: stronger for girls and weaker for boys.

In the presented paper we discuss the interrelation between math self-concept, achievement and school prestige. It is well-known that school status and school climate do have significant impact on students’ achievement and attitudes. H.Marsh with colleagues has discovered so-called “reflected glory effect”: the schools which are known as the best and most prestigious ones add to students’ self-concept in certain domains (e.g., math, literacy). The problem is that one can examine this effect only on the data containing questions about parental and children’s views of their school standing. It seems to be impossible when working with such datasets as TIMSS, PISA, PIRLS.
School prestige does not necessarily imply high average achievement. School may be prestigious due to its story and past merits, its geographic position or certain programs. The official status of the school (e.g., Gymnasium vs. Hauptschule in Germany) may also be not the best indicator of school prestige: the group of Gymnasiums is huge, as well as the variability inside this group. This assumption was confirmed by Trautwein et.al., who found that the relationship between self-concept and school track is explained by the grading system (Trautwein et.al., 2006). Nevertheless, in the TIMSS study the best proxy for school prestige would be achievement as such.
It is obvious that prestigious schools can be found in any educational system with no regard to its stratification. The USA gives a good example. Educational system is known to be non-stratified, but there are certain schools (e.g., private preparatory schools), which are evidently “glorious”. Still, one cannot find them in completely anonymous TIMSS or PISA sample. The anonymity makes it impossible to take into consideration some obvious features of “glorious” schools.
The aim of our research is to study “reflected glory effect” and the role of school prestige for math self-concept. We hypothesize that (1) school glory measured as either average achievement or prestige positively affects math self-concept; (2) this effect is especially strong for low achievers; (3) school public prestige is a better predictor of “glory effect”, than school achievement.

The proposed paper views educational choice between academic and vocational tracks from the vantage point of risk aversion in uncertainty. Modern rational choice and decision making theory imply diverse ways of dealing with uncertainty, and bounded rationality approaches are used in the studies of educational choice and educational trajectories and pathways. J. Goldthorpe and R. Breen suggested that when making educational choice individuals try to avoid risk of status loss, which prevents them from upward mobility. In most cases students would try to attain same relative educational level as their parents did.
We study educational choice and educational trajectories in Russia. In current Russia secondary education (11 years) is mandatory with two main pathways: either through academic high school (11 grades) or through vocational school (2 years) or technical college (3 years) to which students can move after the 9th grade. Students can then advance to the tertiary level by passing centralized national examination. It seems (both for parents and education policy makers) that the most direct pathway to tertiary education is via academic high school. This pathway implies higher costs, delayed entering of the labor market, and risks of drop-out or future unemployment.
However, higher education is considered to be of great value in itself, and up to 70% of students want to enter tertiary level of education. Families have to cope with economic and social uncertainty, including the complexities of current educational system, the problem of university quality etc. As current research shows, there is second important pathway to tertiary education via technical college after which many students can have a lateral transfer to the university with a possibility of transferring credits for advanced courses they took in a third year of technical college. The system of technical colleges, which emerged out of previous Soviet system in the last 20 years, is close to American community colleges. In particular, Russian technical colleges like American community colleges serve as vehicle of upward mobility for low-income and migrant students.
We view educational strategies and differentiation in the pathways in relation to social class of families from the vantage point of view of risk aversion theory. We suppose that vocational schools are chosen by students with working class background, technical colleges are the choice of low middle class, and staying in academic track with going to university after the 11th grade – of middle and upper strata.

Topics
Conferences
About
Laboratory of Sociology in Education and Science