A meeting with Mexican and Brazilian guests: Alma Maldonado-Maldonado and Simon Schwartzman

SESL greeted Alma Maldonado-Maldonado from Mexico and Simon Schwartzman from Brazil who came to Saint-Petersburg after an international conference organized by HSE on October 27th 2010. 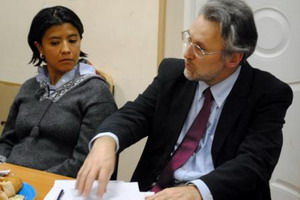 SESL  greeted Alma Maldonado-Maldonado from Mexico and  Simon Schwartzman from Brazil who came to Saint-Petersburg after an international conference organized by HSE on October 27th2010. The meeting was held in a free atmosphere with a cup of tea. An unhurried talk in English lasted about three hours. It began with introducing each other – all participants introduced themselves and briefly told about their scientific interests, shared their experience of research projects participation. 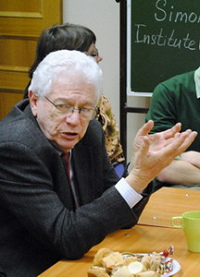 Simon Schwartzman, researcher at the Institute for Labor and Society Research in Rio de Janeiro, author of more than 200 publications devoted to social policy, educational and scientific issues  was the first one to talk. He was the president of Brazil’s Statistical and Geographical Institute till 1998, later he worked at American Institutes for Research for several years. He had been the editor of Dados - Revista de Ciências Sociais for many years, was the head of Brazilian Sociological Association, and coordinated a UNESCO educational project in Latin America. Now he is the member of several Latin American and European journals’ editorial boards, the member of Brazilian Science Academy and International Statistical Institute.
Simon shared his impressions of participation in the international conference organized by the Higher School of Economics. The conference was devoted to comparative analysis of academic salaries in 30 countries.
Саймон также поделился своими впечатлениями от участия в международной конференции, которую организовала Высшая Школа Экономики. Конференция была посвящена сравнительному анализу академических зарплат в 30 странах. 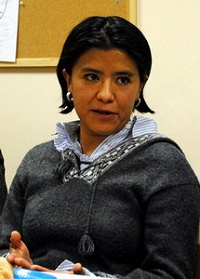 Alma Maldonado-Maldonado works at one of the world’s largest university - National Polytechnic Institute (Mexico City) and collaborates with Lynch School of Education, Boston College, USA. Alma is engaged into comparative analysis of higher education systems and also conducts research on the differences in faculty wage systems in different countries. She is also interested in highly educated professionals’ migration, their further job placements, work conditions, etc. International organizations which influence the higher education policy and reforms are also in the sphere of her interests.  Alma thinks that the role of international and regional organizations occupied with higher education becomes more and more important in the world. These organizations help with elaboration of international and national strategies of higher education development, sponsor academic research, shape the discussions’ format and connect the politicians and scholars on the international scene.  In particular, she studies the role of such key players as the United Nations Educational, Scientific and Cultura Organization (UNESCO), the Organization for Economic Cooperation and Development (OECD), the World Bank and General Agreement on Trade in Services. Alma  touched upon the question about how the globalization and internationalization go on in developing countries, she emphasized the difference in the “brain-drain” term peculiar to developing countries and brain-exchange observed the most in developed European countries.
The problem of student academic mobility especially interests Alma, in particular with Mexico and the USA. Alma connects low student mobility in Mexico with the fact that the pension funds are attached to the universities where people studied. This makes it difficult to change a university.

The Russian participants of the seminar told about their own student mobility experience and noted the existing barriers. For example, you are supposed to pass many exams in order to transfer from the Saint-Petersburg branch to the Higher School of Economics in Moscow to the same department because of the difference in academic programs. This takes a lot of time and interferes with fully enjoyable studying process. Both SESL researchers and guest asked questions during the meeting. Simon was in Russia 20 years ago and noticed a lot of changes this time. “Which values replaced the Soviet values, may be imperialistic ones were revived?” – Simon asked. Alma was interested in which countries the students would like to continue their studies. Germany, Sweden, the USA, Ireland and French speaking countries – these countries were named. The meeting of SESL with Mexican and Brazilian scholars came to an end, but fruitful collaboration has just started =)