At 17th of October were meeting with two postgraduate students of BIGSSS. 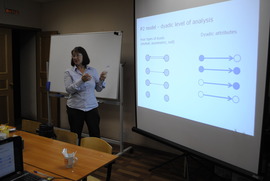 At 17th of October were meeting with two postgraduate students of BIGSSS.

It was the second meeting of our laboratory with postgraduate students of BIGSSS. During this event researchers presented results of their studies.

Ivaniushina V. A. presented results of “Network analyses interethnic connections”. The main goal of this project is to define influence of ethnicity on formation friendly relationships of 8 – 10 grade pupils in Saint-Petersburg. Valeria Ivaniushina says that establishment of friendly relationships is independent from ethnicity to Russian children. Probability of choosing friends is equal to every ethnicity. The main conclusion is that migrant-children are not discriminated by Russian children. 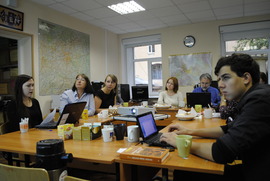 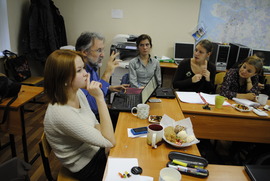 Petrova Maria presents “School tracking and sorting”. There are two concepts in research. The first is appearance of tracking between classes in school and consideration of sorting as mechanism of segregation between schools. Surveys, interviewing and field work were the main methods of this project. Respondents were 9th grade pupils and their parents, who live in the Leningrad region. Maria considers sorting through different factors, which have an influence on placing of children: distance, location, quality of school. Tracking shows through factors, which influence on placing of children between classes: progress in study, ethnicity belonging, socio-economical status. Besides, tracking has an influence on separation: expectations, choice of education and possibilities.