On April 11-13 intensive seminars on network analysis were held in the Laboratory. They were held by invited specialists in this field from the University of Groningen. 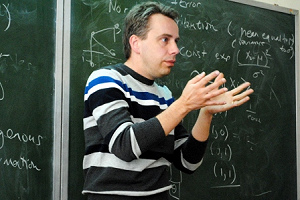 Seminars on network analysis were held in the Laboratory on April 11-13 by specialists from the University of Groningen, Netherlands. Christian Steglich and Marijtje van Duijnare among the most prominent scholars in network analysis and the University they work for is a world-known center in these studies. Cristian and Marijtje have been working in this field for 15 years now and have unique experience in exploring various types of networks.

What did we need these seminars for? In what areas can network analysis be used? Cristian Steglich started his lecture with answering these questions. He told that this method of data analysis differs much from the classical statistics. The basic principle of statistics in to collect data separately which doesn't happen often in real life. Network statistics takes a network as a core element and studies interconnections of the data. Later on these links are visualised and modelled for interpretation and analysis.

As Cristian Steglich noted, “You don’t need network analysis if there are no interconnections". These interconnections can be seen in the following spheres of social life: 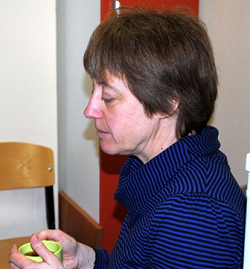 The classes were very intensive. During theoretical part the participants studied the history of network analysis and its key terms. Network analysis was detached from social psychology. Its appearing was connected with group behavior studies and further development resulted from graph theory and practical anthropology advance. Colleagues from Greningen also reminded the basic terms of network analysis to the audience, such as types of networks and actors, reciprocity, density etc.

The participants studied some new methods of data mining and typical problems that happen during this process. One of these problems is defining network boundaries. Where are they? Where does the network finish? The second problem is sensibility to missing values which can spoil the results for the whole network if, for example, a student was absent during the survey. If this student is connected to many people, the network will be irrelevant. The third problem is that people systematically forget certain links and often do not name the closest people. 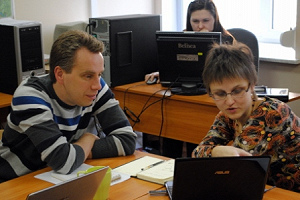 It was interesting to learn about reciprocity in networks of various types. Its plausibility is higher in egalitarian networks (trust, friendship, communication, etc.) then in hierarchical networks that show distribution of power or chains of supply. Speaking about transitivity, there is certain dependence: plausibility of link between two actors can depend on connection of these two with some third vertex. This thesis helps to measure popularity or social isolation of people. One more interesting thing is “Mathew effect” when the rich get richer. 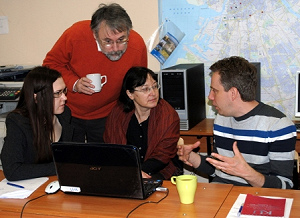 During the practical part of the seminar the participants carried out laboratory work using R. Special attention was given modeling and studying probability models p1 and p2. Probability model p1 shows possibility of network genesis; it was created in 1980-s by Holland and Leinhardt. Probability model p2 considers original independence of dyads; in this model less number of parameters can be used.

It was very useful that the participants managed to discuss their own projects that suppose network analysis with the colleagues from Groningen. Read about this part of the seminar in the next article.

Keywords
Research Laboratory of Sociology in Education and Science