On April 5-6, 2012 lectures and workshops by Professor Frank Van Tubergen (University of Utrecht, The Netherlands) were held at SESL. 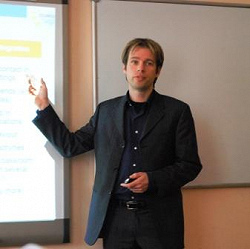 On April 5-6, 2012 lectures and workshops by Professor Frank Van Tubergen (University of Utrecht, The Netherlands)were held at SESL.

The laboratory has already formed links with Dutch colleagues at both individual and institutional level. In April 2011 workshops on network analysis was conducted at SESL by Christian Steglich and Marijtje van Duijn (Groningen), in November Frans Feron and Hans Bosma (University of Maastricht) visited the Lab and held lectures at HSE. Several SESL researchers have attended famous Utrecht Summer School and winter workshops in Groningen. Finally, in January 2012 Daniel Alexandrov negotiated co-operation and student exchange between the laboratories at HSE-St.Petersburg and Groningen.

Such intensive cooperation is established primarily due to the fact that the studies of education and migration, which are held in the Netherlands, are close theoretically and methodologically to the Laboratory projects. Professor Van Tubergen occupies a special place among his colleagues because of his project (study of the migrant children in four European countries). He is responsible for the Dutch side. His project is the closest to the SESL research (schools of St. Petersburg and Moscow region). 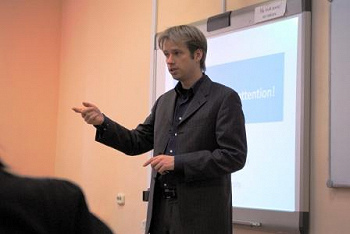 On April 5, Professor Van Tubergen gave a public lecture. He spoke about the details of the study of migrant children in four European countries ("Children of Immigrants: Longitudinal Study in four European Countries"). In the first part of the presentation Professor Van Tubergen told about the framework project and its main purposes, in the second part he presented the first results.

Four countries are involved in this cross-country research project: Germany, Netherlands, Great Britain and Sweden. The peculiarity of the project is its panel (longitudinal) character, as well as the design of the sample: the sample is randomized, it includes both migrants and local population. This sample allows making an adequate comparison of local and migrant children. 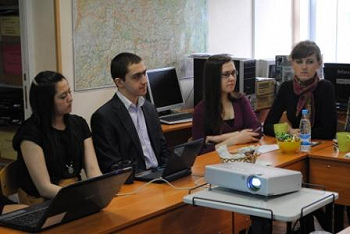 The study was launched in October 2009, in 2010 a pilot survey was conducted, in November 2010 the first wave of the study was completed. In November 2011 the second wave took place, in November 2012 the third wave will be conducted. The original sample included 14-year old students in schools with various percentages of migrant children studying there. Longitudinal study is a survey of the same pupils at the regular intervals which allows to trace changes in friendships, educational plans, values, and so on. However, the researchers faced the problem that some students are changing schools, moving to other classes etc. This fact makes their work more complicated, especially in the third wave of the study, because many students choose colleges after the 9th grade. The researchers hope that they will be able to find these students via e-mail or social networks and ask them to fill in the questionnaire. 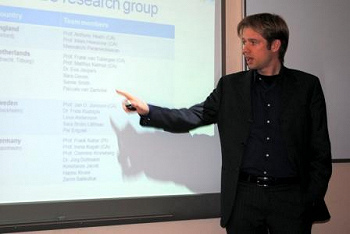 The main objectives of the project are studies of structural, cultural and social integration of migrants in Europe, and the changes that occur in migrant families over time (across generations).

The researchers considered ethnic identity, religious practices, native language and the language of the host country as markers of cultural integration. For example, the downward trend of speaking mother tongue among migrants in the second and third generations is observed. 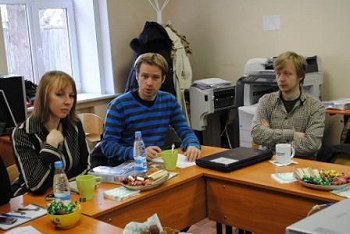 The researchers studied social networks in the classroom: friendship, dating, bullying, etc. This part of the project was especially important for SESL researchers as many scholars at the Lab are involved in the analysis of social networks of schoolchildren. Databases contain networks of friendship for more than 400 classes in the schools of St. Petersburg and Moscow region. These data are processed by using the same techniques as used in the European study. The difficulties of existing software and methods (P2 and ERGM) were discussed with Professor Van Tubergen. P2 modeling allows working with many networks simultaneously, but this method of analysis has serious limitations; ERGM allows conducting more sound analysis but for one network only. The problem of multi-level analysis of network data is being solved by many experts on networks, among them is Mark Tranmer who visited the Laboratory in early April 2012. 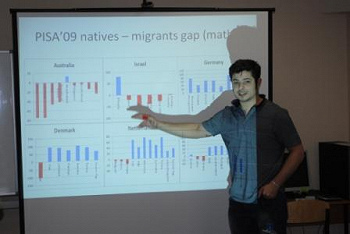 In conclusion, Van Tubergen said that in the future they plan to continue and expand research by adding new participating countries or by adding other age cohorts.

On April 6 researchers and students presented their projects to Frank van Tubergen. Veronica Kostenko told about the study of values and norms of migrant children based on data collected during the project "The Situation with Migrant Children in St. Petersburg", commissioned by UNICEF. The sample consists of 50% non-citizen children and 50% of locals (citizens) (623 respondents in total). Migrant children are more likely to value traditionalism, however, they also appreciate the importance of helping others, equality, etc.

Evgeny Varshaver told about the difference of educational achievements of local children and migrant children. Researchers have used the data from the World Value Survey (WVS) and the Programme for International Student Assessment (PISA) for the analysis. It was found that the differences in family characteristics and origin region significantly affect educational success, but this finding is relevant for Confucian group only.

Ksenia Tenisheva presented the results of a study of educational achievements of migrant children. The data consists of 104 schools in St. Petersburg, 7300 students in 7-9 grades. One of the conclusions was that members of ethnic minorities in Russia are more motivated in terms of educational achievement than the majority. However, it is not clear whether this motivation declines in the second generation or not.

Alexey Gorgadze told about the project "Ethnic Communities in Social Networks" - the collective project which united students and more experienced researchers of the Laboratory. In the focus of this project is on educational migration and its reflection in student organizations. This research group uses network analysis of ethnic groups and their links. In the focus of the study were ethnic groups that are created in a social network "VKontakte.ru". Alexey presented the results of network analysis, he showed groups of acquaintances and friends by constructing social networks. 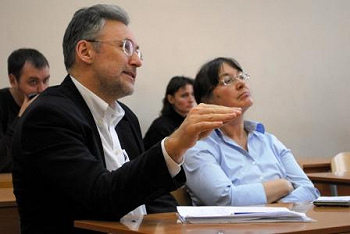 Daniel Alexandrov told about the large-scale study of migrant children in Russian schools. Scholars of the Lab used data collected in St. Petersburg, Leningrad and Moscow regions. The situation in the two cities is different from each other. The level of migration in St. Petersburg is lower than in Moscow. Speaking about sorting between the schools, migrant children are concentrated in small schools. This study has also shown that the presence of migrant children and their motivation in small or regular secondary schools effects positively on the academic results of local children. In large schools the situation is different.

The participants answered the questions, listened to comments and discussed their projects. Professor Van Tubergen was fairly interested in studies that are conducted at the Laboratory, proposed the idea of common projects and discussed plans for further academic cooperation and student exchanges between HSE St. Petersburg and the University of Utrecht.

By Maria Petrova and Veronica Kostenko